History of the Land

All of these commodities were mined at one time or another in the Hills. However, gold has always been the driving force behind the Black Hills economy.

In the 1870s and 1880s, adventurers came to the Hills to “strike it rich” and stake their individual mining claim. In fact, although no real mining was ever done on this land, Powder House Pass is an accumulation of over 120 mining claims. Many have unique names:

And they all have their own history. Most mining claims in the Hills were eventually purchased by large mining interests, and many mine ownerships were transferred from one to another before Golden Reward Mining Company took over the ownership of what is now Powder House Pass.

The original Golden Reward Company was organized in 1887 in the Ruby Basin district at the base of Terry Peak. The holdings were increased late in 1897 and the company was reorganized as the Golden Reward Consolidated Gold Mining & Milling Company. The property at that time contained more than 440 patented claims (or about 3,400 acres of land).

Early in 1895, the Golden Reward Mining Company showed, as the product of six days’ work, a flat brick worth $17,000 (Kingsbury, 1915). By 1901, it was estimated that eight million dollars’ worth of gold had been taken out of the Black Hills region.

Golden Reward ranked second with $1.2 million behind the $4.3 million of Homestake Mining Company located in Lead, South Dakota. This standing continued until 1918 when high costs, as a result of World War I, caused Golden Reward to close.

Powder House Pass Planned Community acquired these claims. It is extremely rare to find contiguous land of this quality and quantity in the Black Hills. And this, along with its location in the recreational corridor of the Hills, made the development of a community a natural conclusion. Now is the time to stake your claim!

The namesake of Powder House Pass was derived from the three historical powder houses adjacent to the northeast corner of the planned community. These were utilized many years ago by Homestake Mining Company for storage of dynamite. Given the rich history of this area, it’s beneficial that all of us keep this history alive.

And therein lies the significance of why we named this community Powder House Pass.

History Of The “Reno” Powder Houses

In 1919, Homestake Mining Company completed the construction of three powder magazines and a guard house in the Reno Gulch area—about three miles from the town of Lead and location of the Homestake Gold Mine operation.

The three nearly identical 60’ x 18’ brick buildings still stand near Englewood and above the Englewood Hydroelectric Plant to the north/northwest. The guard house was transformed into a residence and housed a Homestake family that served as custodians of the magazines until the time the magazines were no longer utilized. The guard-house residence has since been torn down, and only the concrete foundation remains on the site.

The purpose of the magazines was to store a reserve supply of explosives for the mine, primarily dynamite in fifty pound boxes and fuses. A secluded area was chosen to insure that a large population of people was not at risk in the event of a fire and a subsequent explosion.

The explosives were shipped on the Chicago Burlington & Quincy (CB&Q) railroad line and delivered directly by rail to the magazines. A spur track, built and owned by Homestake Mining Company, was connected to the Black Hills and Fort Pierre branch of the Burlington Railroad to access the magazines. This service line was also used to deliver coal and explosives to the mine operation in Lead. The rail corridor was vacated in 1983.

Homestake abandoned use of the buildings in the mid-1960s due to the mining operation moving away from dynamite as their primary explosive and began using ANFO, an ammonium nitrate/fuel oil mixture.

The risk of explosion with ANFO is relatively low, and it generally required a booster (one or two sticks of dynamite) or Tovex to ensure reliable detonation. Thus, the remote storage site was no longer necessary.

The Bureau of Land Management took possession of the historic structures in 2002 after Homestake Mine Operations ceased. The internationally known George Mickelson Trail is only about a minute away from the historic magazines, and today the trail is utilized year-round for hiking and biking, and snowmobiling and cross-country skiing in the winter.

In 2007, the University of North Dakota’s Department of Architecture and Landscaping did a study on the powder houses to create ideas for the planning, restoration, and renovation of these structures.

A Powder House Pass lot is more than land. It’s a piece of history. Own yours today! 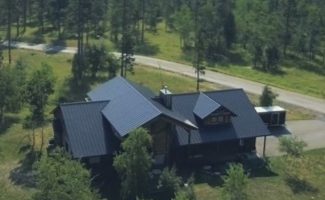